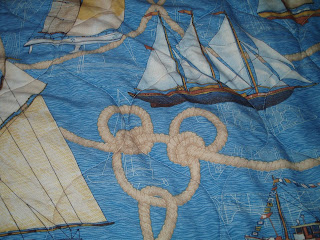 On your next trip how about a little family challenge to see who can find the most hidden Mickeys. What's a Hidden Mickey you say? (from Wikipedia)

A Hidden Mickey is a subtle formation of a silhouette of the head of Mickey Mouse and his two ears, a more complete representation of Mickey Mouse (such as Mickey mixed in with a crowd or in the background), or a representation of another character (such as the huge hidden Jafar at the Pangani Forest Exploration Trail in Africa in the Animal Kingdom) that is found in various Disney media, such as animated films, TV series, or the Disney theme parks.[1] Mickeys may be painted, made up of objects (such as rocks, or three plates on a table), or be references such as someone wearing Mickey Mouse Club ears in a painting.

HINT: Always check out your hotel room (This is the bedspread at Disney's Yacht Club)
Steve Barrett has an excellent book and web-site to help you on your Hidden Mickey journey.
Posted by Gary Hasty at 5:27 PM